Why we are the ‘go-to’ experts for your move

It’s been a super busy year at Your Organizing Consultants. We’ve hired more employees to be able to offer more services and help more people. This has also allowed us to enhance our internal operating structures and work on larger client projects. Recently, we had the opportunity to work with a couple that was moving. NOTE: The names have been changed and we’ve left out some details to ensure our client’s privacy, but with their permission, we are sharing the base of their project. 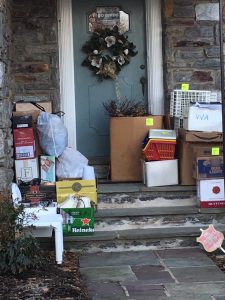 Bonnie and Tom called me because they were ready to make the decision to move permanently to their vacation home. They lived in their family residence for many years and have (as well all do…) collected and acquired throughout their lives, but more importantly… they had enough space in their home that allowed them growth, without having to spend much time on maintaining their space and declutter. A common problem for larger homes.

We felt starting with a space that was more difficult for Bonnie to manage alone was a good place to start. So together, we began in her office space. As usual, the office becomes a holding spot for those things we aren’t sure what to do with, not to mention a place where the paper goes to die. While we worked in her office, Tom started to sort through his own stuff. This is fairly common when we work with couples, one spouse works with the organizer, while the other works independently.

During the sorting process, we had to work around the fact that the house was going to be staged before listed, and certain pieces were going to go with them to their new permanent home; however, there were a number of items that were identified for donation and needed to go. We scheduled regular pickups from various charities and organizations for them so that they could continue to focus on the decisions, while we focused on the details. A few things we found while sorting:

When we finished the sorting, decluttering and downsize, the next step was to bring in the stager to get the house ready to sell. While being staged, the staging team came in with her painters and other tradesmen to get it ready for the market. Throughout the process, and until the house sold, the client continued to having us assist them in the details, addressing final round of donations and making sure everything was prepared for the movers.

We worked together on this project weekly for 4 months and met the client’s deadline to get the house listed on time. The client was able to move into their new home while the house was listed.

If you are thinking about moving call us at 484.432.8692 and we will help you figure out where to begin, that’s the hardest part.